How does that saying go?  Love what you do and you will never work a day in your life.  Or something like that.  I do love what I do, and I feel lucky that people are willing to pay me to do it but before I started writing beading tutorials I had no idea just how much work it took to create one so I thought I would explain a little about my process.  Over the years I have developed some time-saving tricks, such as keeping blank template files of each type of tutorial (along with notes on how to input the files/photos that need to go in them just in case I forget) but they are still time consuming to create.  From the first idea, through designing, stitching samples, taking/editing photos, writing the tutorial, and proof reading it, to creating the listing it is equivalent to a full time job – with the exception that I get to work from the sofa – and I tend to work for ten to twelve hours a day with the occasional comfort/meal break.

As an example, the ‘Sleeps Till Santa Bauble’ that I have been working on this week has taken me just short of 40 hours so far with the proof-reading and listing still to go. 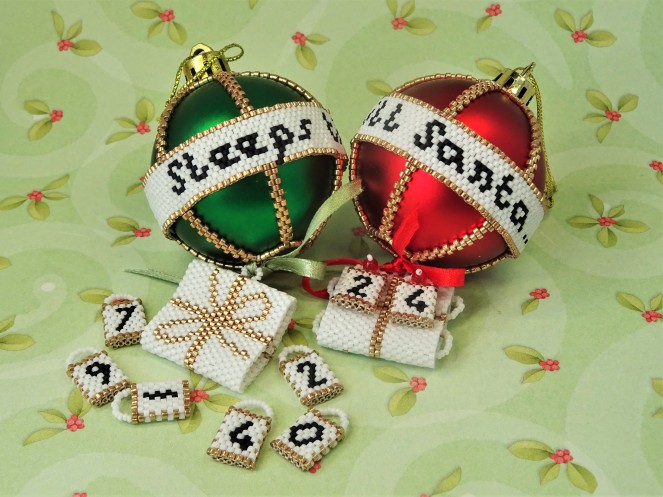 Typically I will sit down and play around with beads until I find a design a like, but with a peyote tutorial the first step is to design a chart to stitch from.  Having already made beaded baubles in a similar style I knew the number of beads required to wrap round the bauble and the number of beads in the strands used to attach it to the bauble so this saved me having to spend time working it out.

I designed the band with the Bead Tool program.  I also designed the double sided number tiles that I knew I wanted to use, although I wasn’t sure at this point how I would work them into the design.  Once they were stitched up I tried a few different ways to store them in a box/pouch that would hang from the bottom of the bauble and double up as a way to display the countdown.

I stitched samples of some of the elements to check they would work and assembled them into the first finished bauble.  Once I was happy with the design I moved on to writing the tutorial.  I used the notes I took while I was designing/stitching the samples to write the step-by-step instructions, leaving space for the accompanying photos.

Next, I stitched another sample, taking photos and adjusting the steps of the tutorial as I went.  I take at least three photos of each step or part step so that I can use the best one in the tutorial.   I edited the photos and inserted them into the tutorial then downloaded PDF files of the peyote charts, edited those and added those too.

I kept a log of the amount of time I spent doing each thing and was quite shocked when I added them up.  Designing the charts took around 3 1/2 hours.  Stitching the samples (including those that I discarded) took around 23 hours.  Almost a full day of stitching!  Writing the tutorial took around 4 1/2 hours including time spent editing it, and taking and editing the photos took around 8 1/2 hours.  That’s a total of 39 1/2 hours so far.  For one tutorial.  And that was less than it would have been had I not already had the figures/measurements from those I made last year to help me.

The time each tutorial takes will differ depending on the complexity of the design but this example is certainly nothing unusual so it’s lucky that I enjoy it!  Now I guess I had better go and get this tutorial finished off so I can start on the next one.

This site uses Akismet to reduce spam. Learn how your comment data is processed.